J. Stewart Bryan III from Media General accepted the George Mason Award for service to Virginia journalism. He discussed his 50-year media career and the tough decision to sell The Richmond Times-Dispatch and other newspaper properties to Bershire Hathaway after generations of family ownership.

On the younger end of the career spectrum, two budding journalists were honored with scholarships. John McAuliff from the University of Richmond accepted the George A. Bowles Memorial Scholarship while Vanessa Remmers, a student at The College of William & Mary, accepted the Virginia SPJ,SDX Scholarship. 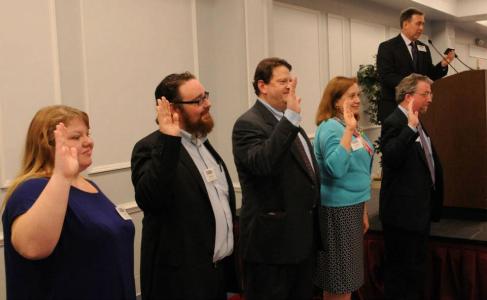 Also during the evening, members of the 2012-13 board of directors were sworn in by Brian Eckert, Region 2 Director.  Chapter members for more than 20 years were recognized and presented with plaques.

Members and guests raised approximately $450 for the Virginia SPJ,SDX Scholarship Foundation bidding on various items during a silent auction. A special donation of $1,000 for the foundation from the late SPJ National President Alf “Goody” Goodykoontz was acknowledged, also.

A Richmond, Va.-based photojournalist exploring the world one frame at a time. View all posts by kane804